On September 22, 2011, TOPS Veterinary initiated a test pilot to study the effectiveness of HydroFLOW’s water conditioning technology on its canine therapy pools. TOPS is in the business of veterinary rehabilitation, and one of the treatment options it often employs is hydro-treadmill therapy. The facility has two - 1,000 gallon therapy pools, supported by a large sand filtration system, a dual-speed filtration pump and a booster for the jets. 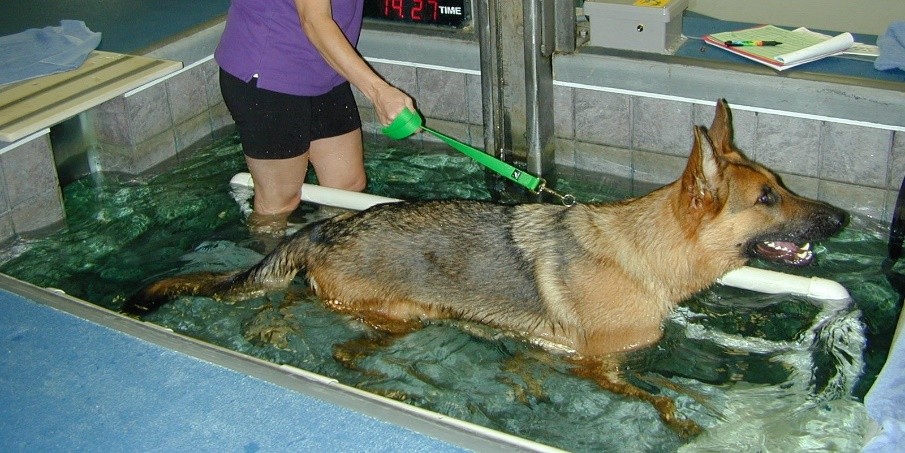 Prior to the pilot study, TOPS treated their pools with a low-level chlorine dosage and a copper ionization system. Additionally, chemicals were used to raise and lower pH, and other parameters on a regular basis. The pools were filled with water from the facility’s well, which was treated to remove high levels of sulfur (19 ppm). Although the water is treated, the pool walls had become a greenish color, which the staff speculated was either the result of sulfur that remained in the water after it was treated or algae growth.

TOPS’ interest in the HydroFLOW system was twofold: First, it wanted to see if it could maintain bacteria levels of zero by utilizing the system with a decreased amount of pool chemicals.  Second, it wanted to find out if the system would have any effect on the greenish color of the pool walls.

A dog contributes much more dirt and bacteria to a pool than a human, putting a much higher load on the treatment system. Utilizing a pool for approximately 8 to 10 dogs per day compounds this effect, especially in such a small pool. Testing of the HydroFLOW system lasted 9.5 weeks.

TOPS took several baseline measurements prior to the installation of the new treatment system. The first measurements were taken prior to backwash, after evening shock the night before. They showed that with the facility’s current treatment method, the pool water was relatively free of bacteria, with only five colonies appearing.  The pool wall, however, was riddled with bacteria, with many colonies appearing in the test.

A second set of measurements was taken after backwash, with a two-day stabilization period to adjust the pH.The pool water continues to be essentially bacteria free, with only one colony appearing. Next, the facility put the pool into service for one day, with bacteria being introduced by the dogs.

A test was taken the next morning, following evening sanitation. No colonies appeared, indicating that the facility’s current treatment protocol was effective, even with dogs introducing bacteria to the water. 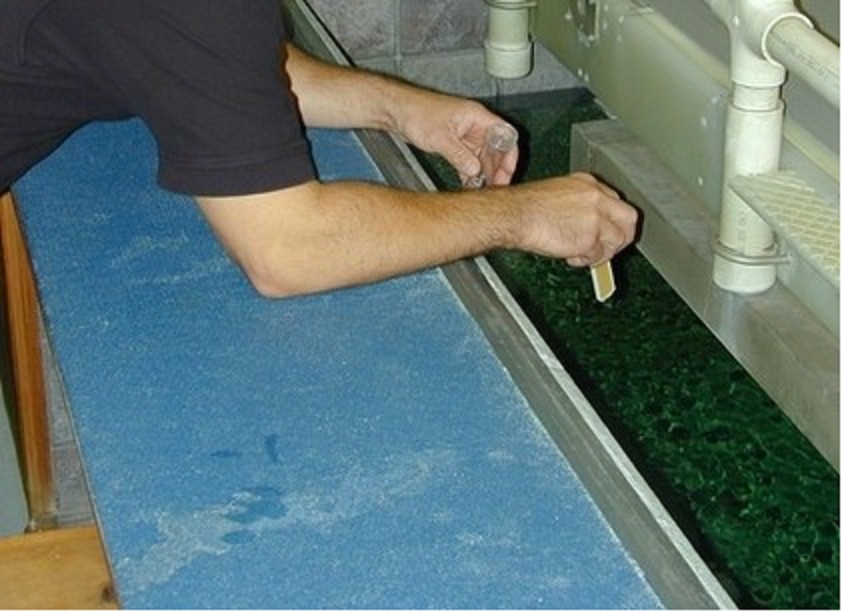 The HydroFLOW system was then installed, and TOPS continued with its normal chemical dosage schedule, but with no additional backwash. The purpose was to determine whether the HydroFLOW system had any negative effects on bacteria levels, and to provide a baseline with the new system, but without a reduction in chemicals. After two weeks, tests showed that the new system had not increased bacteria levels, with no colonies appearing.

TOPS continued this treatment scheme for an additional four weeks. Tests at the four and six-week marks continued to reveal no bacteria colonies. By six weeks, the maximum time between backwashes had elapsed. It was also determined that the treatment scheme had no effects on filter pump pressure.

Next, TOPS ran the HydroFLOW system for two weeks with chemicals reduced by 25% and the copper ionization system turned off. Testing after a backwash showed that the water remained bacteria free even with the reduction in chemicals.

For the next 1.5 weeks, staff reduced the chemicals by 50% and continued to leave the copper ionization system off. The pool water continued to have very low bacteria counts.

At the end of the pilot study, TOPS re-tested the pool wall. It did not expect dramatically different results from the baseline test, due to the bacteria-harboring nature of the pool plaster. The test did show an improvement in the amount of bacteria however, with further improvements expected over time.

The results showed that the facility could reduce chemical usage in its pools while still maintaining a sanitary environment by implementing the HydroFLOW system. Although the results showed that chemical usage could be reduced by up to 50%, the facility continues to use the 25% reduction to maintain a minimal chlorine signature in the pool at all times.

According to staff, the clarity of the pools remained excellent throughout the test, with no noticeable degradation of water clarity. There was also no noticeable change in filter pump pressure, likely due to the fact that the filter pump is below grade, putting additional gravitational pressure on it. This is consistent with the history of the pool, because staff almost never see the pump pressure rise prior to backwashing.

The installation of the new treatment system allowed TOPS to reduce its chemical load and shut off its copper sanitation system with no negative effects in the water balance and no increase in bacterial growth. Though the system did not kill all the bacteria on the wall, it greatly reduced the number of colonies compared to the previous treatment system.

TOPS treats 6 to 10 dogs in the pool daily, and with only 1,000 gallons of water to circulate - dirt, dander and bacteria can accumulate quickly. The clarity and water quality stayed pristine with the new system, even during the busiest swim times. The reduction in chemical use has allowed the facility to save money and with further testing it may be able to decrease chemical use even further.

Contact us today to learn more about our products and their impact on the community and water sources.