Everything that goes down the drain eventually ends up at a wastewater treatment plant. You name it and it can probably be found somewhere in the wastewater stream. Dirt, food particles, fats, oils, chemicals and other less savory materials contaminate the water. This can cause a number of different issues for wastewater treatment facilities and the equipment involved in removing the contaminants from the water so they can be safely disposed of (or reused!). The award winning HydroFLOW devices have been installed to control struvite accumulation, reduce polymer use, reduce chemical use, and enhance filtration efficiency in wastewater facilities across the US and the world. 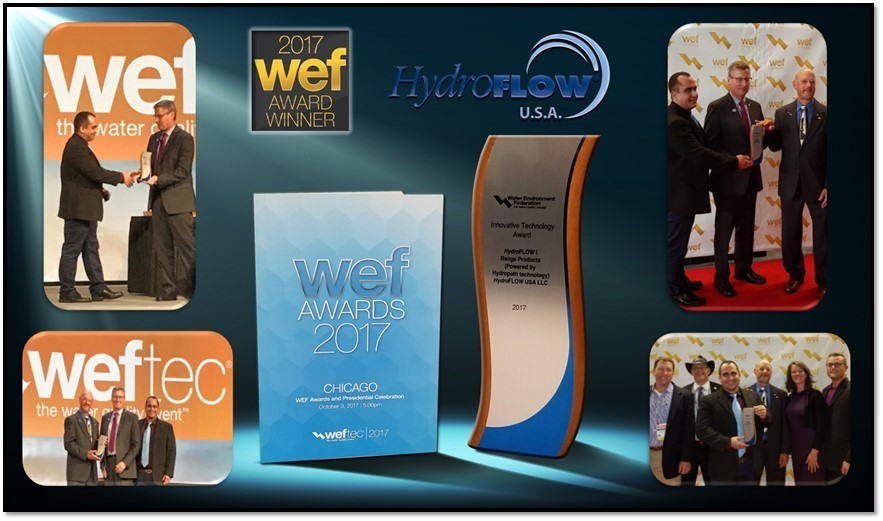 1. Screening - Incoming raw wastewater passes through a coarse screening process to remove large debris such as trash, wood fragments, plastics and grease. The remaining water moves to further treatment while the removed large solids are disposed of in a landfill.
2. Grit Removal - After screening the remaining water passes through a grit removal process where smaller heavy particles such as sand and gravel settle out using gravity. The remaining water moves to the next step while the sand and gravel are also typically disposed of in a landfill.
3. Primary Settling - After the heavier solids have been removed from the water it passes into a primary settling tank, or clarifier. During this step heavier solids will slowly settle out of the water while oils will collect on the top. The solids are removed from the top and bottom of the tank to be further treated (sludge processing). The remaining water continues on to further purification processes.
4. Aeration/Activated Sludge - During this step the bulk of treatment occurs using biological degradation to break down contaminants into more benign materials such as cell tissue and nitrogen. This process is much the same as the natural biological processes that occur in lakes and rivers but happens much faster. The cleaner water moves to the next step and the sludge moves on to further digesting.
5. Secondary Settling - Similar to step 3 the water passes into another settling tank, or clarifier, where any remaining sludge settles out to the bottom. The sludge from the bottom of the tank is returned to the activated sludge process and the now 90% treated water moves to final filtration and disinfection.
6. Filtration - The remaining tiny particles are removed from the water through a series of filter media to ensure all contaminants have been removed.
7. Disinfection - Once virtually all solids are removed, the water is treated for any remaining bacteria through processes such as UV disinfection or chlorination. The disinfected water is then discharged back into the environment per the plants discharge permit. 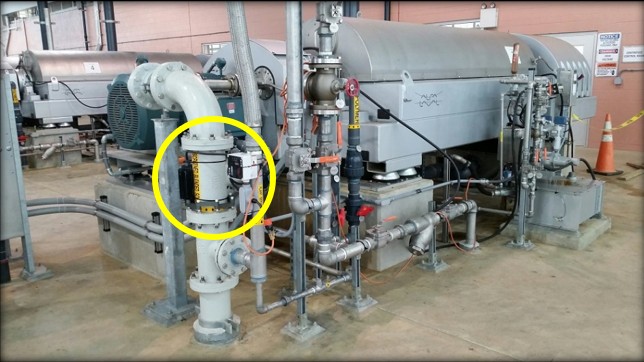 1. Air Flotation Thickening - The activated sludge is thickened by pumping tiny bubbles of air through it. The biological solids then float to the top and are skimmed off for further treatment and the remaining water below is returned to the start of the treatment plant. This process will typically increase the solids concentration from 1% to 3%.
2. Anaerobic Digestion - In this step the thickened activated sludge is combined with the primary sludge from steps 2-3 above and pumped into a digester. The sludge is then heated and continues to mix for upwards of a month where anaerobic bacteria will continue to break down contaminants. This process produces methane which is in turn used to heat the sludge.
3. Thickening - After the sludge is digested is it moved to a thickening process to remove more water from the solids. Gravity belt thickeners, belt filter presses, and centrifuges are examples of equipment used to further separate the solids from the water. The remaining water is very high in ammonia and is stored separately to be slowly returned to the start of the plant. The dried sludge is typically referred to as "cake".
4. Solids disposal - The solids have now had most of the water removed and are shipped off to landfill, incinerated, or in some cases used as fertilizer as they are high in nitrogen.
Dissolved Air Flotation
What is Dissolved Air Flotation (DAF)? DAF is a process that separates heavier solids from the wastewater stream. After course solids such as sand, rocks and other grit are removed from the incoming wastewater stream with screens and in various settling ponds. The remaining water flows into a dissolved air flotation system for further solids removal. In short, the water flows into a large tank where tiny air bubbles rise from the tank bottom up through the water to help separate the solids. Lighter solid materials will float up to the top of the tank while heavier solids will sink to the bottom. This leaves a layer of cleaner water in between that is pumped out for further treatment, while the solids at the top and bottom of the DAF are removed and treated separately.
How can HydroFLOW help?
Typically, a polymer will be used to aid flocculation of the small solid particles to make them separate from the water easier. HydroFLOW can help improve the efficiency a DAF process by enhancing flocculation which in turn will reduce polymer use. Read more about how HydroFLOW can help with enhancing flocculation.
Sometimes as the water sits in the DAF process biological contaminants can begin to cause an undesirable smell. Since HydroFLOW can also reduce biological contaminants, a side benefit for DAF applications is a reduction of that foul odor. This in turn can extend the frequency of cleaning the system saving both time and additional water usage.
Belt Filter Press
A belt filter press (or gravity belt press) is essentially a long porous filter used to further dry out sludge. The sludge is spread out across the belt and is either pressed through rollers (belt filter press) or allowed to sit and let gravity slowly pull the water through the filter. In both cases Struvite buildup is a common problem. As Struvite accumulates on the belt filters it begins to block the water flow reducing efficiency. Struvite is also very hard to remove requiring the system to be shut down for cleaning which involves physically removing the struvite from the belts and rollers. This harsh cleaning process can also damage the equipment, especially the belt itself. 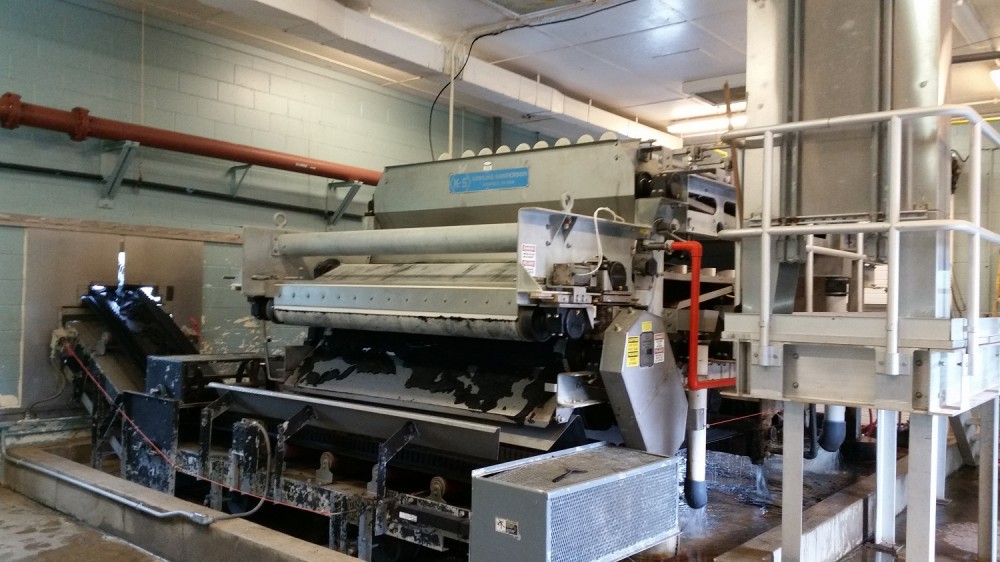 Belt  Filter Press
How can HydroFLOW help?
HydroFLOW has been shown to not only reduce Struvite accumulation but also causes existing crystals to soften. Instead of forming hard crystals the Struvite is more like a thick mud that can be simply washed away with a pressure washer. The reduction in accumulation and softening of the Struvite leads to longer times between shut down intervals, faster/easier cleaning, and less damage to the filter equipment. For more information about how HydroFLOW helped to reduce struvite accumulation on a belt press read the following two Third Party Verification Reports:
HydroFLOW Third Party Verification Report-Augusta
HydroFLOW Third Party Verification Report-Denver
Centrifuges
After passing through the filter press the sludge moves on to the next phase of dewatering. A centrifuge is commonly used to remove even more water from the solids and works on much the same principle as the spin cycle in your washing machine. The partially dried sludge enters the centrifuge and is spun at a high speed forcing the water out through tiny screens.
Read more about how HydroFLOW reduces Struvite scale accumulation in dewatering centrifuge. 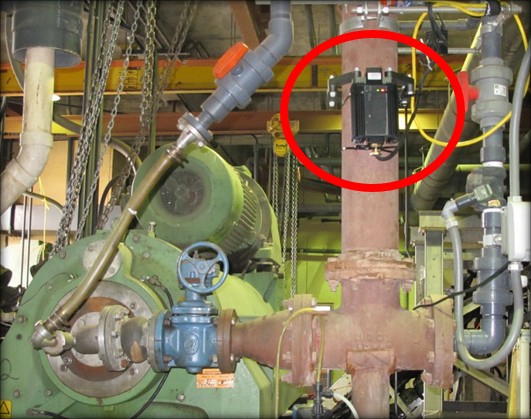 HydroFLOW unit installed on a centrifuge

HydroFLOW can Help with Polymer Reduction

Polymer is often used to aid thickening of the sludge and one of the side benefits of HydroFLOW is enhanced flocculation or thickening of the solids. Because of this not only can we help reduce Struvite issues we can also help reduce the amount of polymer used in the dewatering process.
Final Filtration
Once upwards of 90% of the solids have been removed from the incoming wastewater through the previous treatment steps the remaining water is passed through a series of filters. These filters, commonly sized around 10 microns, serve to remove the smallest of particles still suspended in the water. As the filters collect these solids, they will need to be periodically backflushed to remove the solid materials from the filter media.
HydroFLOW is used in many filter enhancement applications such as swimming pools, reverse osmosis filtration systems, and cooling tower water filtration. By enhancing flocculation (forming larger solid particles) the filters can remove these tiny debris more easily. The larger particles don't drive into the filter media as far as the smaller, untreated particles, tend to do. This leads to not only clearer water leaving the filters, but an easier to remove surface layer on the filter media. Since fewer particles have driven into the filter media backwash times are reduced (although backwash frequency may increase) and overall, less water is wasted backflushing the filter media. Read more about how HydroFLOW can reduce Polymer use in waste water treatment plants.
Disinfection
After the water has passed through final filtration plant operators must ensure the water is free of any viruses and bacteria before it is discharged back into the environment. Typically this is done with chemicals such as sodium hypochlorite (bleach) or with expensive UV disinfection methods that require lamp replacement over time.
HydroFLOW has shown great results in controlling bacteria and algae, particularly in recirculating systems such as a cooling tower. Even on single pass applications HydroFLOW has shown reduction in bacteria (typically a 45-50% reduction), in turn reducing the amount of chemicals needed for final disinfection. 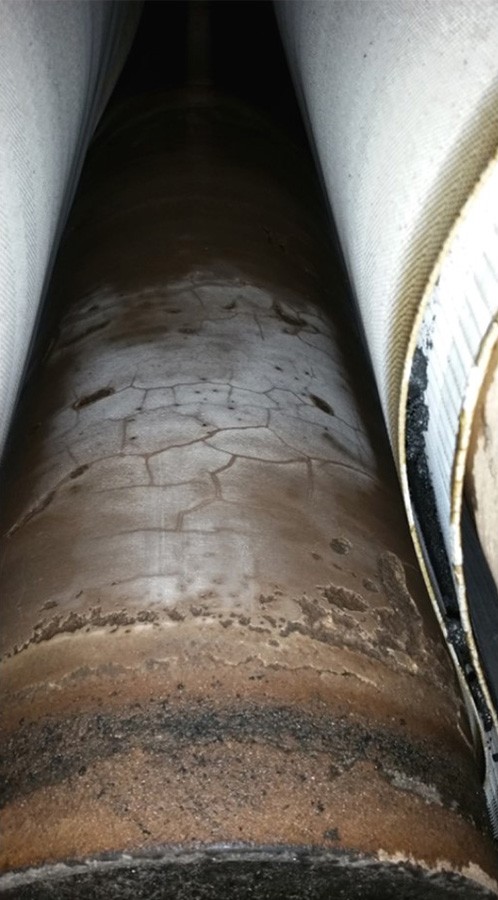 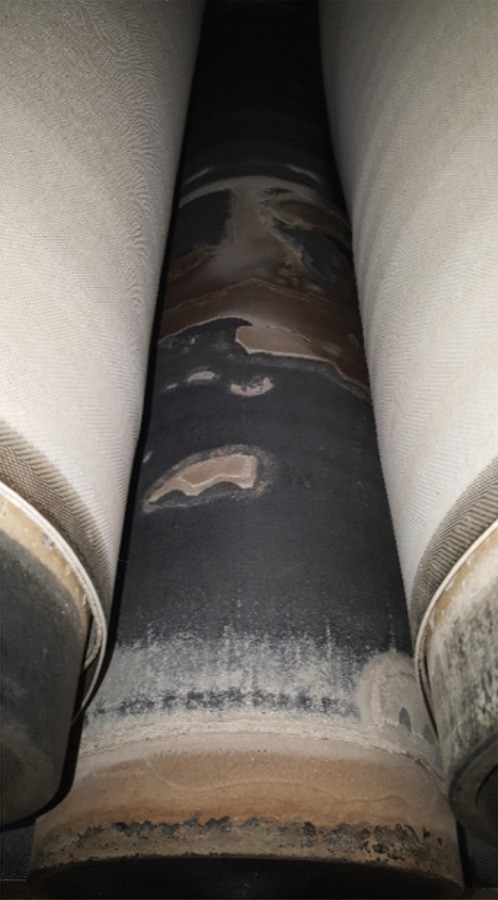